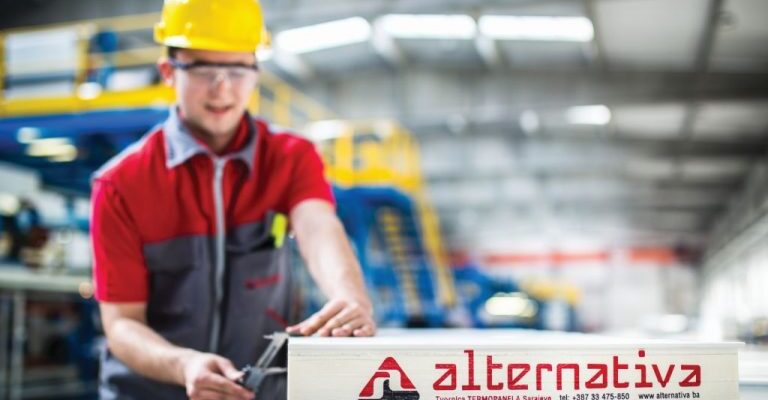 In the search for positive stories from the business world, we came to the realization that, despite the crisis caused by the pandemic, one domestic company is moving towards new ventures.

It is Alternativa d.o.o. Sarajevo, which plans to put into operation another production line of sandwich panels in the coming period.

The first such line in Alternativa arrived in 2017 and operates at maximum capacity, which means that the market has recognized the quality and need for their products.

“Considering that the previous purchase of the line of sandwich panels proved to be a very successful investment, in April last year we signed a contract for the delivery of a new line with a renowned Italian supplier. So far, 15 shipments of equipment have been delivered, and we expect the remaining 20 shipments.” After the complete equipment is delivered, the installation of the same will begin and trial production can begin in the fall of this year, “said Alternative.

With continuous investments in equipment and constantly training staff, Alternativa has become an absolute leader in this part of Europe in the production of sandwich panels, profiled sheets, and supporting elements for roofs and facades. The value of planned investments for 2021 is approximately 10 million KM.

The proof that the current pandemic did not stand in the way of this company’s success is evidenced by the results they achieve in both the domestic and foreign markets. It is interesting to note that over 50% of the produced sandwich panels were exported. Aware of the situation that affected the whole world, Alternativa primarily took care of timely procurement of materials, regardless of the prices that were “wildly” uncontrollably, in order to be able to follow all serious projects in Bosnia and Herzegovina, Serbia and other countries in the region. Slovenia, Hungary, Austria and Germany are gaining more and more trust.

Large investments also lead to the creation of new jobs. In the first half of April, eleven new employees were given the opportunity to be part of our team, and with the commissioning of the new line, the need for an additional workforce is expected, which will exceed the total number of 150 employees.

This website uses cookies to improve your experience while you navigate through the website. Out of these, the cookies that are categorized as necessary are stored on your browser as they are essential for the working of basic functionalities of the website. We also use third-party cookies that help us analyze and understand how you use this website. These cookies will be stored in your browser only with your consent. You also have the option to opt-out of these cookies. But opting out of some of these cookies may affect your browsing experience.
SAVE & ACCEPT